The fight against COVID-19: mRNA Vaccines 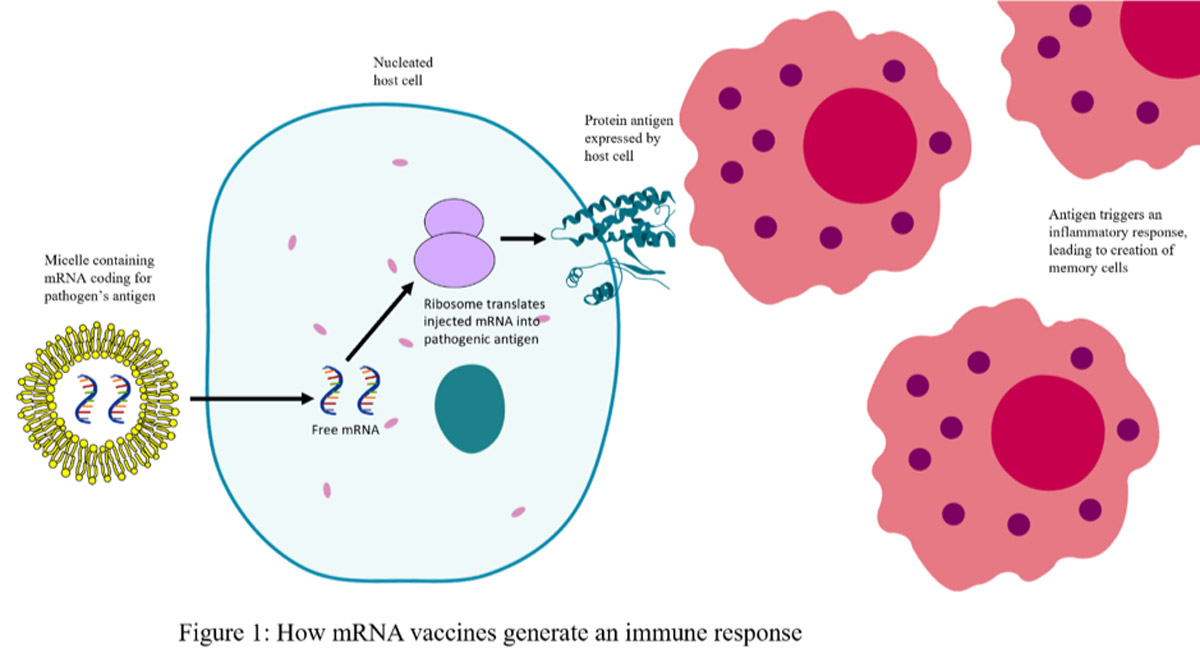 Written by: Asanka Wijetunga BSc(Adv), MD student at The University of Sydney, Australia

SARS-CoV-2, the virus behind deadly COVID-19 pandemic, is thought to have spread to humans from bats. It infects the respiratory tract and in approximately 20% of patients, devolves into acute respiratory distress syndrome (ARDS) and multi-organ failure1. Males, the elderly, and those with pre-existing hypertension (and other comorbidities) are presumed to be at the highest risk of severe infection2. With over 2.3 million cases and 160,000 deaths worldwide since the outbreak began in November 2019, researchers are experimenting with a raft of treatments and preventative vaccines that will be key in quelling this global pandemic. In the following blog articles, we will elucidate the mechanisms behind the cutting-edge agents being tested to combat COVID-19. Although much speculation exists as to when a vaccine will be ready for widespread human use (since to date, no approved vaccine exists for a coronavirus), vaccination will likely be key to disease containment.

DNA, contained within the nucleus of all cells, holds the genetic code to every protein within the human body. But since DNA is trapped within the nucleus, and the ribosomes, the cell’s protein-making machinery, reside only in the cytoplasm, a ‘photocopy’ of the relevant segment of DNA must be sent from the nucleus to the ribosomes, so the correct protein can be created. The ‘photocopy’ used by cells is messenger RNA (mRNA). mRNA is similar to DNA, however has only one helix, can be produced rapidly based on the DNA blueprint, and, due to its short half-life, degrades quickly to ensure that no extra protein is produced.

RNA viruses are a large subclass of viruses, including rhinovirus (causing the common cold), hepatitis C virus and coronaviruses themselves. These viruses have been hijacking our protein making machinery for millennia. Being unable to self-replicate, viruses rely on human cells to convert their RNA code into viral proteins. After entering our cells, viruses release their RNA, which contains the genetic code for their own viral proteins. Our ribosomes are tricked into translating this viral RNA into viral protein, thus creating millions of copies of the virus, which then burst out the cell to repeat this process within neighbouring cells. We have been applying this process to vaccines since the 1990s, and have found that mRNA injections can induce an immune response and immunological memory in hosts3. This is how:

The RNA code of any pathogen’s antigen can be inserted into an mRNA vector which is known to stimulate ribosomes. The mRNA is then dressed up to look like human mRNA (by giving it a 5’ cap and a 3’ poly-A tail) to prevent it from being recognised as foreign and destroyed by the immune system. These mRNA strands are then encapsulated in a protective lipid micelle and injected into the bloodstream, where they enter tissues via endocytosis. Once within the cell, the mRNA escapes from its coat, and is recognised as mRNA by ribosomes, which rapidly translate it into protein, which becomes visible on the cell surface or in the bloodstream. As is the case with other vaccination designs, the pathogenic antigen in the body triggers an immune response, leading to the development of long-lasting memory cells, which live dormant in the blood and bone marrow. These cells will be rapidly activated if the antigen is detected in the future, removing the pathogen before it has a chance to cause infection (Figure 1)4.

Due to a deficit in technology at the time, the concept of mRNA vaccination was overlooked in favour of more conventional designs, such as subunit and live-attenuated vaccines. However, with novel micellar delivery methods better guarding against rapid intracellular degradation, and advances in the polymerase chain reaction (PCR), huge amounts of stable mRNA can now be produced very quickly, without reliance on cell lines5. Despite no mRNA vaccines currently in use, the current labour-intensive processes of vaccine discovery may not be sufficient to address the pandemic, and routine use of mRNA vaccines may well be the phoenix of the COVID-19 crisis, with some of the world’s largest pharmaceutical companies such as Pfizer, BioNTech and Moderna already commencing Phase 1 clinical trials for their COVID-19 mRNA vaccines6.